We take pride in our work, and you will too!

Every property must contend with water, whether it is coming off the roof, travelling across the terrain or coming up from the ground. At Art Wood Enterprises we have innovative solutions that will turn your water woes into useful, functional and enjoyable additions to your property.

Below you can find some of the water management solutions that we offer. Looking for something not listed? Give us a call today at 519-221-1656! 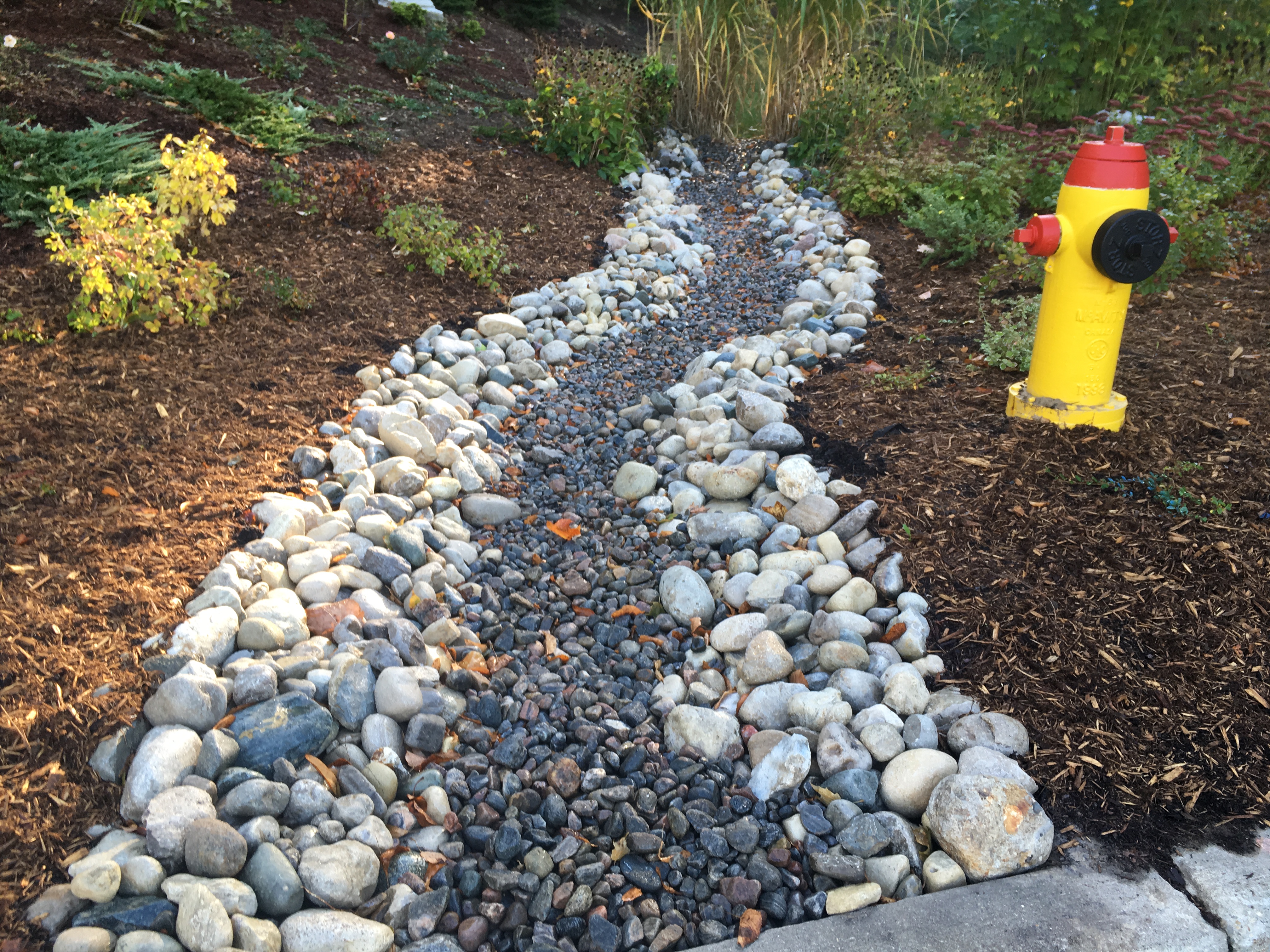 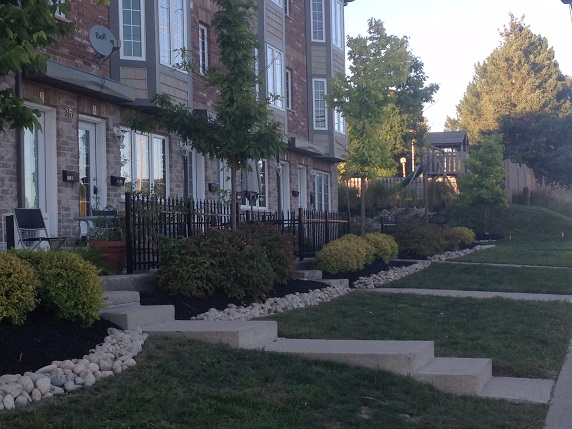 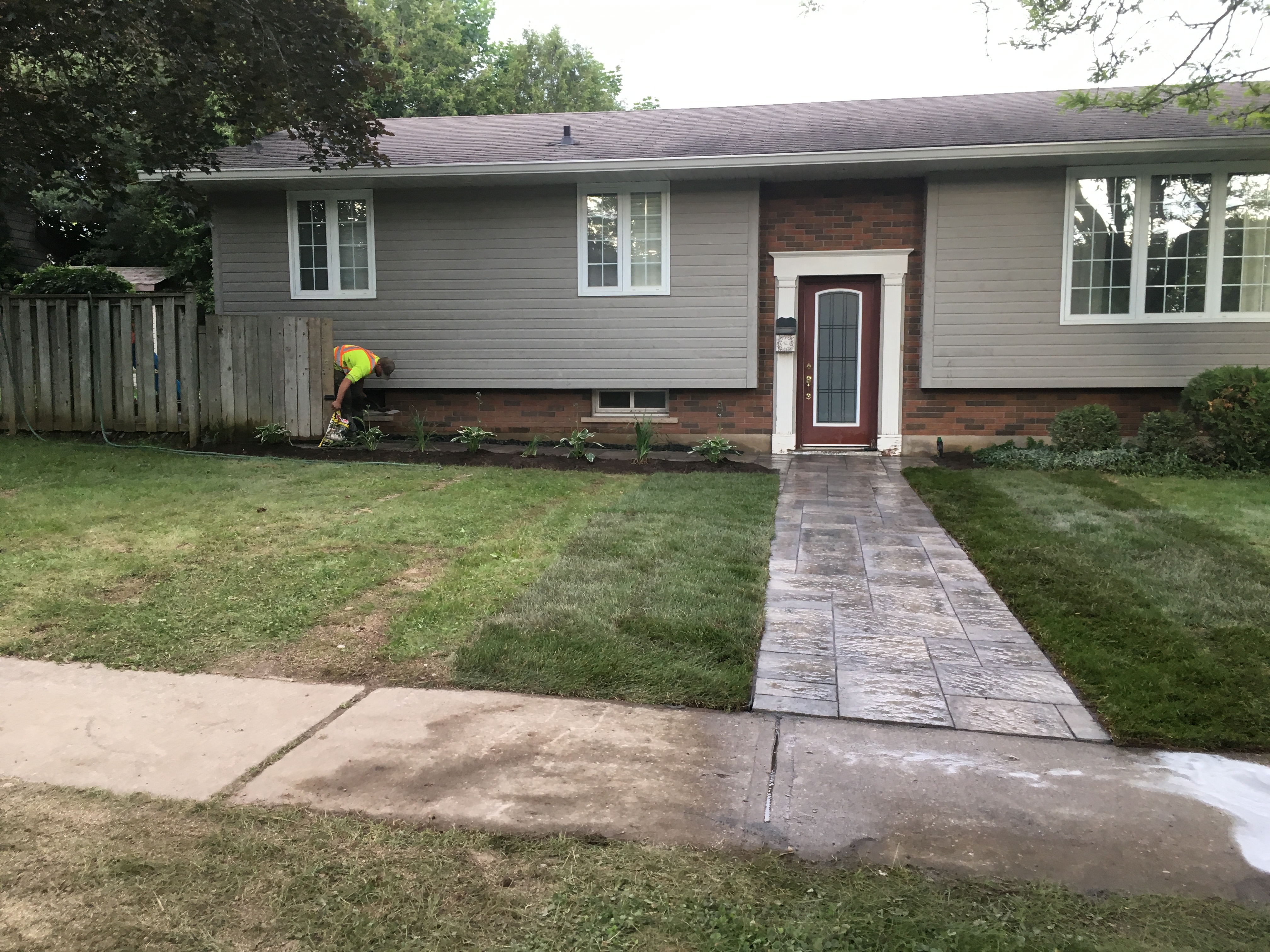 This client’s property sits on a plateau with a forested area above it and a swale alongside the house. All the water on the property is diverted to the swale, which directed the water into the front garden and out onto the road. This was causing erosion of the soil and mulch was covering the road every time it rained. We assessed the situation and determined that a dry creek was the best solution. We extracted the existing plants in the path of the water and created a trench to direct the flow of the water. We installed filter fabric to the trench and a variety of small stones to create a dry creek. This provided somewhere for the water to run freely without picking up any mulch or soil during times of high flow. It also added a nice feature to an already award nominated garden. 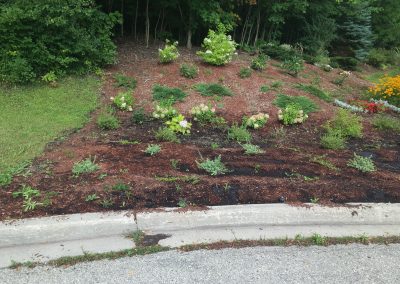 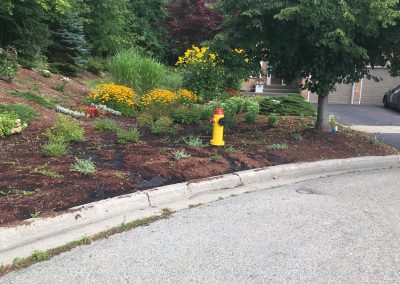 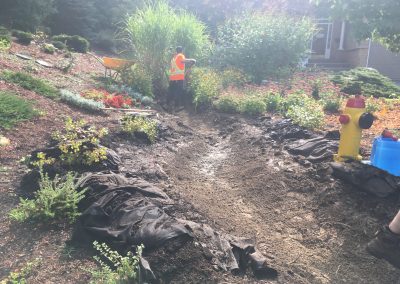 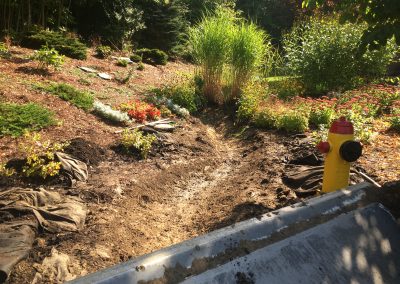 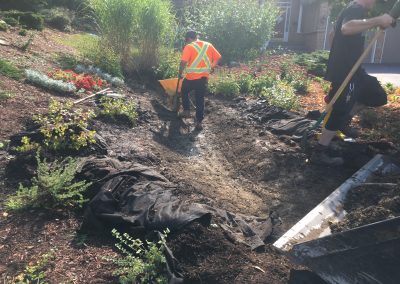 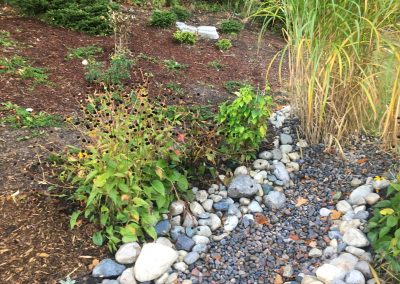 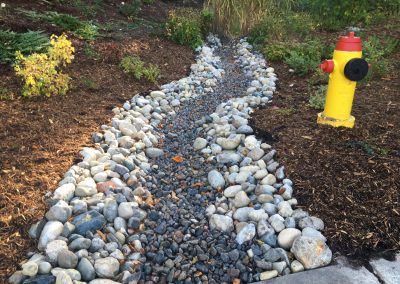 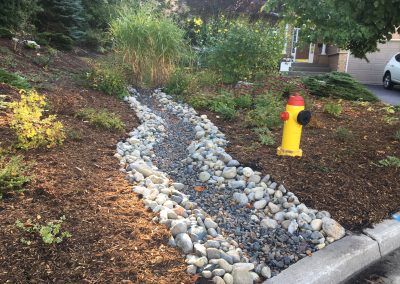 This property sits on a hillside, and originally had downspouts that output directly into the gardens. This was causing major soil and mulch washouts, requiring weekly clean up and/or repairs. This property also has a steep garden at the top of a retaining wall, that was proving to be difficult to maintain. We decided that diffusion rings around the gardens were the best solution, as it would solve the problem and create visual interest. We dug trenches around the perimeter of all the gardens and installed filter fabric to them. Next, we laid perforated pipes in the trenches, and tied the downspouts into the pipes. We then added river rock to all the trenches. By creating diffusion rings, we were able to diffuse the water over the entire garden, rather than just one area. In a heavy rain event, the water will percolate up from the rocks and leave the area without picking up mulch and soil. The garden along the top of the retaining wall was redone to be a river rock garden, creating a much lower maintenance bed. Immediately following the completion of this project, we noticed improvements on site with soil absorption and to the turf. The areas in the turf that were always the first to show signs of drought stress stayed lush and green for much longer. 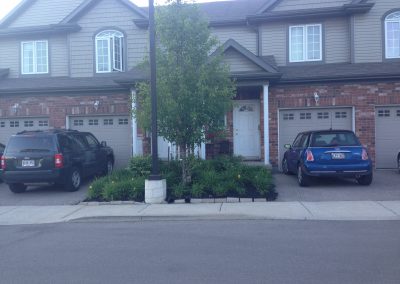 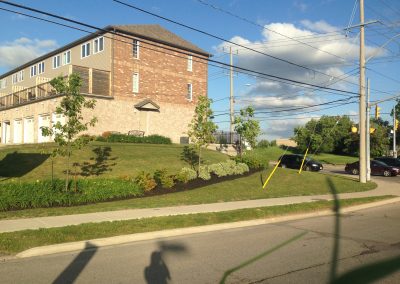 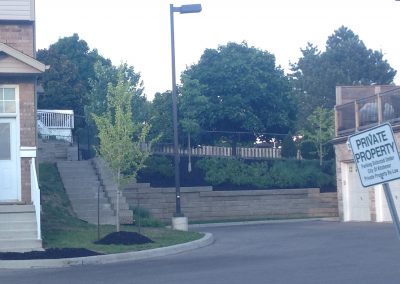 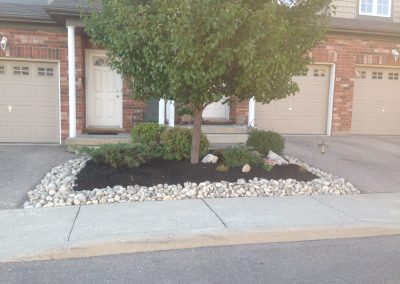 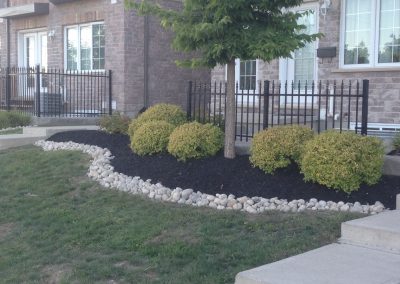 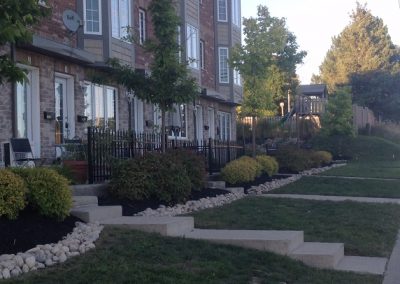 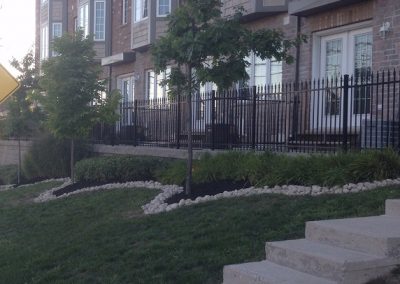 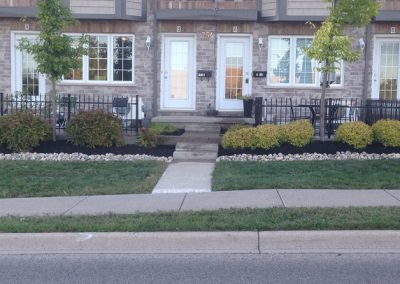 This client was dealing with water pooling at the front door and occasionally flowing right into the house. Upon inspection we found that the walkway was sloped towards the house, and during demolition we discovered the walkway had been installed directly onto topsoil. The existing walkway was cracked, and the shrubs alongside the house were causing a lack of light in the basement. We regraded the area to slope away from the house and installed an appropriate base. We installed a new stone paver walkway and planted smaller perennials along the side walkway to allow more light into the basement. Finally, we remediated the softscapes with new sod. 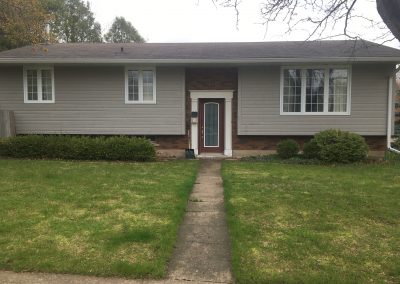 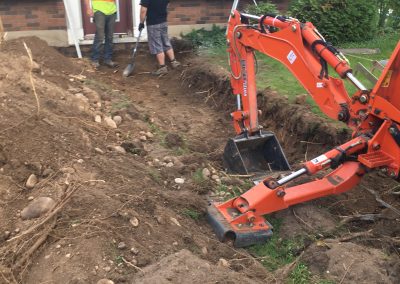 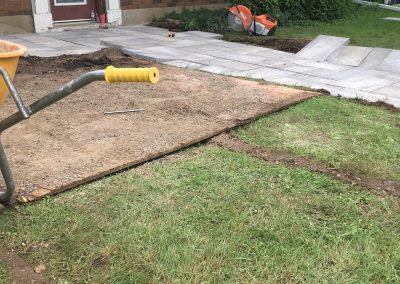 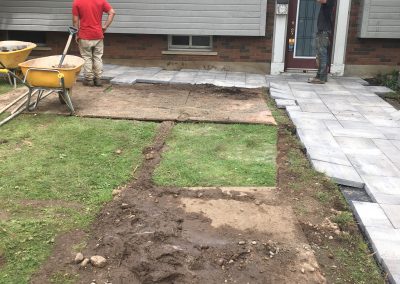 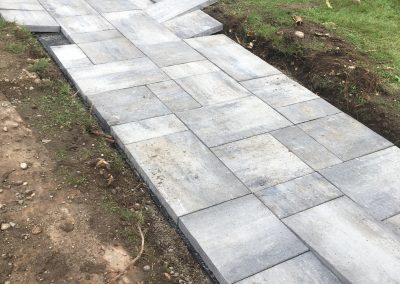 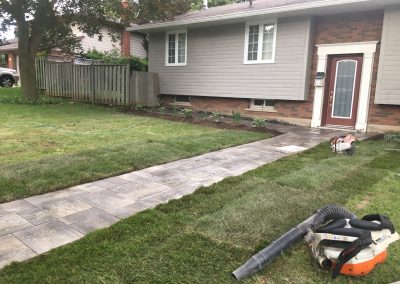 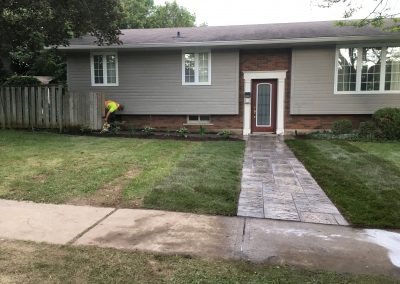 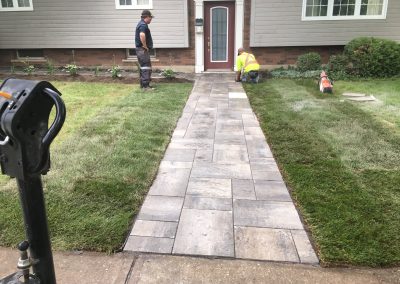